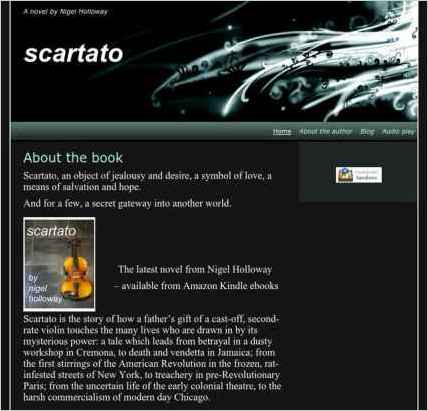 Sandvox was the choice for Mr. Nigel Holloway to build his website. He chose the “Night Breeze” design for the site. People may want to visit the site if they are looking for Historical fiction about a violin made by Guarneri del Gesu.

The website is intended to give information about the historical novel, Scartato, and about the author Nigel Holloway.

The novel started life as an audio play, and eventually became a fictional account of the life of a discarded violin, made by one of the great violin makers, Giuseppe Guarneri (del Gesu), a neighbour of the legendary Antonio Stradivari. In the course of its journey from the 17th century to the present day, the violin becomes, by turns, an object of jealousy and desire, a symbol of love, and a means of salvation and hope. And for those privileged few, able to conjure its magical song, a secret gateway into another world; a world where flaws turn to uniqueness; helplessness to strength; and failure to triumph.

The blog is intended to fill out the background to the book, as well as to provide insights into all the interesting things that I found during my research!

The target audience is anyone with a portable digital device who can run the Kindle reading app, who also has an interest in historical fiction, violins, the early American Theatre, and in particular the period leading up to the American War of Independence.

As far as I am aware, no one else has tried to tell the story of how a cast-off, second-rate violin survives through the years to affect the lives of those who are touched by it.

While I was starting to write the first posting of the blog, (where the idea for the book came from) I remembered that a lot of my initial interest in the period came from John Gay's The Beggar's opera (originally presented in 1728, and which later became Bertholt Brecht and Kurt Weil's Threepenny Opera). Writing this blog entry gave me the inspiration to start working on my next project: a modern adaptation of the Beggar's Opera into - the Beggar's Rock Opera! [Watch this space - I'm going to need a new website to publicise it!]

I chose this particular design because the graphic seemed to complement the feel of what I was trying to achieve with the book itself.

I've done nothing clever except to include a link to the original audio play, which I hope might provide sufficiently interesting to encourage people to buy the book!

This website was created by Mr. Nigel Holloway of United Kingdom. He has also built the following websites using Sandvox: