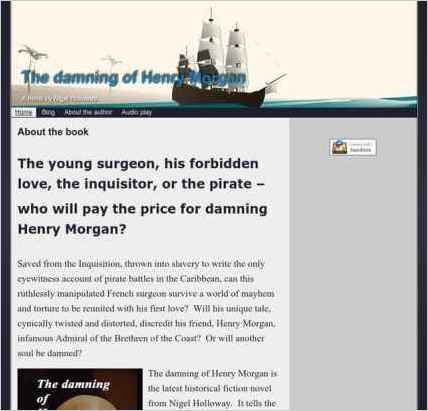 To build “The damning of Henry Morgan,” Mr. Nigel Holloway chose Sandvox. He chose the “Imagine” design for the site. People may want to visit the site if they are looking for Historical pirate fiction.

Visit The damning of Henry Morgan »

The website is intended to give information about the historical novel, The damning of Henry Morgan, and about the author Nigel Holloway. The novel started life as an audio play, and eventually became a fictional account of the writing of the only eye-witness account of piracy in the Caribbean, 'The American Sea Rovers'. The damning of Henry Morgan seeks to explain how the original book came to be written and how it played a significant part in the the international politics being played out between the great European powers of the 17th century. The blog is intended to fill out the background to the book, as well as to provide insights into the research process, and all the interesting things that didn't make it into the book!

The target audience is anyone with a portable digital device who can run the Kindle reading app, who also has an interest in historical fiction, and in particular the short period at the end of the 17th century when piracy was rife in the Caribbean.

As far as I am aware, there are no other books which try to explain how the Frenchman, Alexandre Olivier Exquemelin was saved from the Inquisition, and thrown into slavery to write the only eyewitness account of pirate battles in the Caribbean. The book tells how this ruthlessly manipulated French surgeon survived a world of mayhem and torture in order to be reunited with his first love, and how his unique tale, cynically twisted and distorted, would eventually discredit his friend, Henry Morgan, infamous Admiral of the Brethren of the Coast - all in the name of the one true Church.

Interestingly, as the book had originally been an audio play, it was relatively easy to create an audio trailer for the book (also available on the website). The next challenge is to add visual images to this trailer to turn it into a short video advert.

The key element in the whole book is the background of piracy on the high seas. The use of the image of the small boat seemed appropriate to start with, until I can find out how to replace it with a more authentic-looking pirate galleon (even though pirates didn't actually sail galleons out of choice - as they were too heavy and clumsy for the exploits of the pirates).

Nothing really original, except the use of the audio trailer (later to become a video trailer!)

This website was created by Mr. Nigel Holloway of United Kingdom. He has also built the following websites using Sandvox: